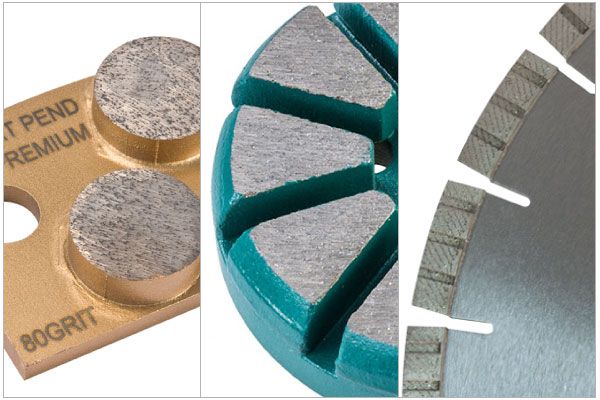 Like all diamond tools, diamond grit is suspended or held within a matrix.  In the case of the sintered bond, the matrix is comprised of varying metal powders subjected to high heat and high pressure fusing the matrix and diamond grit into a solid metal segment.  The resulting piece is a multi-layered segment designed to grind.

Sintered segments are welded to working bodies such as cutting blades, floor plates and discs.  These segments can vary widely in size and shape, but more importantly, they vary in density or hardness.  And this is where the complexity begins. 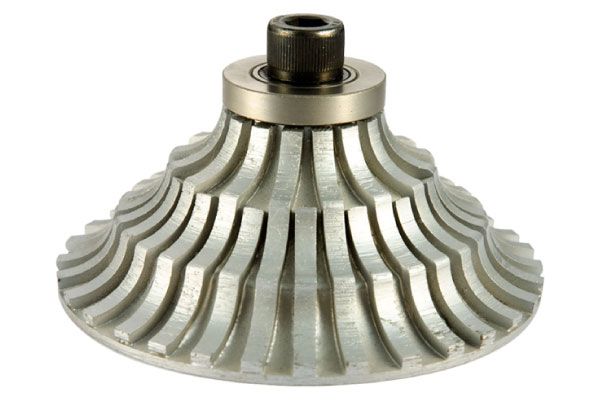 Segments can vary widely in tool type and application. various metal bond structures have been designed to more appropriately match the variety of working materials.  Continuous rimmed tile blades definitely do not have the same matrix as a concrete floor preparation plate.  Though ultimately both gradually grind the working surface, the rate at which the matrix exposes the diamond to the surface is the key factor.

Ok, so really what does that mean?  In order for the diamond grit to work or grind the material, the metal matrix needs to grind away exposing the diamond particles gradually and evenly.  Too quickly, and the tool is wasted prematurely.  Too slow, and the tool glazes, but more about that later. 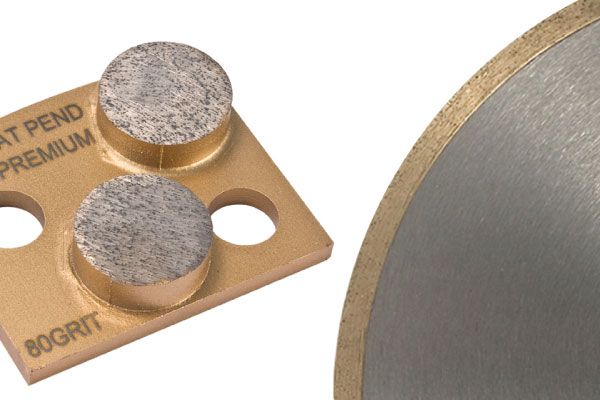 A sintered floor plate vs. a sintered cutting blade - note the variance in color.

We now focus in on sintered segments for the concrete industry.  No other material is as variant and complex as concrete.  Without getting into too much detail, the aggregate in concrete varies from region to region either being very abrasive (such as travertine, limestone or sandstone) or very hard (such as granite or river stone).  In order to handle this variance, three common sintered segments are used: soft, medium and hard bonds.  Softer bonds have greater quantities of softer metal powders are in the mix, such as cobalt.  Conversely, harder bonds have harder metals in the mix.

Contrary to intuition, soft bond sintered segments are designed for hard concrete.  And hard bond is designed for soft or abrasive concrete.  Why so counter-intuitive?  Well, a really hard concrete with granite or river stone aggregate requires the matrix to more readily expose the diamond grit in order to work through the hard material more effectively.  Abrasive surfaces will chew through a soft metal bond and thus requires a much harder segment to keep the diamond in place long enough to work the surface.

So how do you know which bond to use?  For general reference, concrete aggregate maps will indicate what aggregate is commonly used in your area.  An impact hammer hardness test can also give you an indication of how hard your concrete surface is.  The medium bond is by far the most popular and most common bond used.  In most cases, the medium bond segment will do the trick.  Typically the soft and hard bonds are reserved for the extreme cases, which are less common. 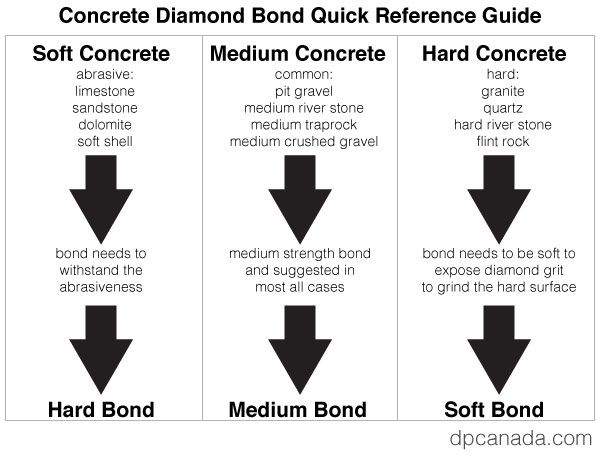 A quick reference chart on choosing the right bond

There are two common issues that are clear indicators that your segment is a mismatch for your material: glazing and premature segment wear.  Glazing occurs when the metal matrix doesn’t wear and doesn’t expose the diamond grit.  The tool, in this case, doesn’t grind at all.  This is seen often when a hard bond is paired with a hard surface.

Premature wear is a strong indication that the matrix is wearing too quickly essentially kicking-out the diamond grit before it has a chance to work the surface.  The result is the same as glazing in that the segment doesn’t grind at all.

We have always considered concrete grinding to be an art form because choosing the right bond, among other factors, greatly impacts the success or failure of the job.  Those who can read the concrete floors accurately are those who are true masters of their craft.

Like this article? Be sure to check out our previous article on the basics of resin bond.  See all the articles in The Basics series and brush up on your diamond tooling knowledge

Contact Us
About Us
Become a Distributor
Join Our Team

DuraShine and DuraShine System are trademarks of Diamond Productions Ltd.

We use cookies to improve your experience. By your continued use of this website, you accept such use   I understand